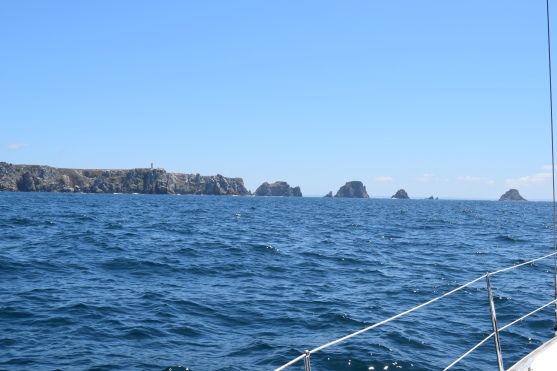 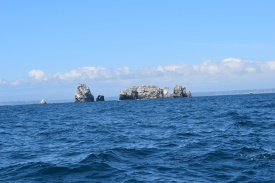 Rocks off the Pointe de Touliguet

Rocks off the Pointe de Touliguet

We spent a lazy morning having coffee and croissants and visited the chandlers where I collected some larger scale charts than the Imrays that I had brought from the UK. I also bought some winch grease in a spray can as some of the rigging blocks were complaining. We left Camaret after lunch to make our way to Douarnanez, a relatively short hop from Camaret. Bert and Theresa had long gone so we took a short cut between a rocky island and the land to gain some distance on them. Another sunny day with light winds that again meant using the engine. We saw Kokopelli in the distance with her spinnaker up but only sailing very slowly so we made our way to our destination, arriving about half an hour before Bert and Theresa. We were well down our first glass by the time they arrived! We were using Douarnenez as a hopping off point for the Raz de Sein another piece of water, like the Canal du Four that demanded the utmost respect. This passage needed to be passed at slack water and, to benefit from the flooding tidal stream, low slack water was what we needed. Unfortunately that occurred at around 0400 and we all reluctantly agreed to leave Douarnanez at 0100 to catch the Raz at the right time.