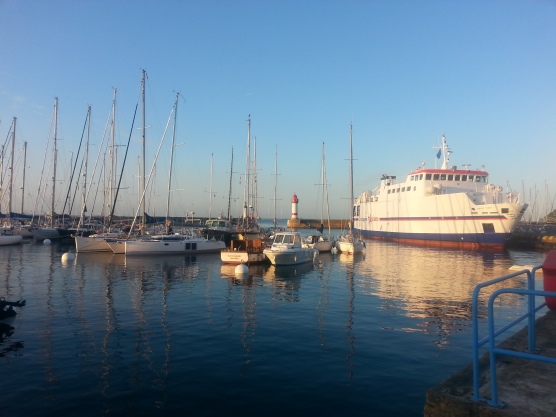 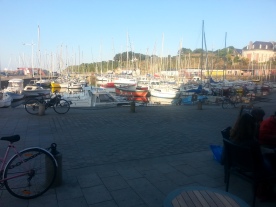 We had to depart from Concarneau early in the morning as we needed fuel and the refuelling berth was in a shallow corner of the marina. High water was required for us to get to the diesel pump. Having refuelled, we then found a problem with the bow thruster which was not working properly making it difficult to turn the boat around. Reversing out, we spotted Bert on Kokopelli’s deck so Jac and I stood to attention and saluted as we passed by, a fitting final farewell!
We had planned to sail to L’Orient but changed our minds on the way and decided to go to Port Tudy on L’Isle de Groix. This proved to be very interesting! The documentation indicated that there were two types of berths in the harbour: pontoons …..good, or mooring buoys ……. very bad (after our experience at St Evette) (Still no Jolly Hooker). We were met at the harbour entrance by a young man in a dory who explained that there was no room on the pontoons and we would have to moor on the buoys! Disaster! Our hearts sank. We could foresee yet another half hour’s entertainment for the locals coming up with a corresponding reduction in our self-esteem and a complete reassessment on the part of foreigners as to the reputation of the British Naval tradition. On entering the harbour, our “helpful” guide led us towards a gap in the moored boats that it would have be difficult to slide a mini through, let alone a 39 ft. long 12 ft. wide yacht. We bottled out and went the long way round reversing all the way into shallow water at the back of the harbour. After a lot of faffing, while I tried to stop Synergy running aground, we were directed to raft onto a British flagged yacht and tie fore and aft to the same buoys as our neighbour. Miraculously this all went very smoothly and we breathed a sigh of relief.

Jac’s Bit.
Chris’s rafting up was amazing!! The Royal Navy would have been very proud of him!

Back to Chris……
We inflated the tender and rowed ashore where we paid our mooring fees and explored the water front, eating at a dockside restaurant, followed by a rather erratic trip back to the boat in the tender. And so to bed.

The bow thruster had been playing up since the unfortunate incident with the stray warp at Dartmouth, so I decided to get into the water and assess the damage. The water was warm, over 20°C, but I still got kitted out in my wetsuit, donned mask, snorkel and fins and dropped into the water. A quick survey revealed that the starboard rotor on the bow thruster had lost 2 of its 5 blades and was therefore complaining of the imbalance. There was nothing to be done about it at this stage, short of pulling the boat out of the water and replacing the rotor. I carried a spare, but the risk of dropping a vital component when doing the job in the water made the decision to wait until Gib an easy one.

Moored near us was a Moody-built yacht, “Paddington” which had been previously owned by friends of Jac’s. They were heading over to the French mainland. It’s a very small world!

A bit of boat cleaning was in order, so I started to scrub the decks using buckets of seawater. In the process I managed to lose my valued and valuable folding bucket overboard which immediately started to sink. Without a thought for my own safety, I jumped in after it and rescued the same before it sank out of reach. Unfortunately, I was then unable to get back on the boat as the swim ladder was folded up so I had to call on Jac, who was down below, to give me a hand.

I was down below doing some household chores when I heard a plaintiff cry from up above. I went up on deck only to find Chris splashing around in the sea still wearing his hat and glasses and clutching his bucket! When I found out that his entry into the water was not by accident but in an attempt to rescue his bucket I saw no mercy! Much to the amusement of our neighbours I kept him floundering in the sea for several minutes while I decided on the terms on which I would let down the ladder so he could come back on board.

Having recovered from the unexpected immersion in the harbour we spent the evening ashore, starting in an old pub in the back streets, followed by a kebab at a waterfront café and the inevitable wandering return to the boat. (The evening was at my expense – the terms of being allowed to use my own ladder after the bucket incident!) As night fell musicians on a nearby Irish boat started playing Celtic folk songs and Irish jigs to the appreciation of an audience on all the surrounding boats. I tried to join in with an impression of River Dance on Synergy’s fore deck and only narrowly managed to avoid another ducking in the harbour. A great evening.