With Synergy now stocked with food we anticipated a run down the north Spanish coast to Gijon. This stretch of coastline differs dramatically from France in that there are few marinas so some of the passages we expected to make would require relatively large distances and long days. This first leg would be over 80 miles so we wanted an early start. The day dawned to low cloud and poor visibility but we considered it suitable for our needs so we slipped out of the marina in the growing light and motored down the almost deserted river past the awaking city. Once out in the open water things looked much worse. The weather was as we had seen it in the marina, but it started to drizzle and we found ourselves smashing into 3 metre swells which reduced the boat speed down to 4 knots. At that rate Gijon would be a round 20 hours away and a very uncomfortable day was in prospect. It took little time to make the decision to turn back and we again motored past Santander and attempted to find a berth in the town marina, hoping to avoid a long drag up the river to our previous berth. However, there was “no room at the inn” but a helpful chap in a rib said that we could anchor off the town promenade near the yacht club. In now heavy rain we did just that and, soaked to the skin, we successfully anchored, erected the conservatory including the sides to keep the rain out and settled down to a day of waiting for the weather to clear. The rain stopped and the weather cleared in the afternoon so Bert and I inflated the tender and motored over to the yacht club to see if we could use the showers. The pilot book reads, “Dinghy can be left at the yacht club in great security where guests are welcome.” This isn’t what we found. The yacht club reception was polished wood with cabinets stacked with illuminated silver trophies, obviously a club with great provenance. The receptionist was adamant, “Transito si; servicios no!” Meaning, “You can walk through the building but you can’t use the toilets.” I don’t know if it was just us, but that wasn’t what I would call a welcome! We took the tender back to Synergy and spent the afternoon quietly muttering abuse in the direction of the yacht club and, still smelly, fell into bed for a good night’s sleep. 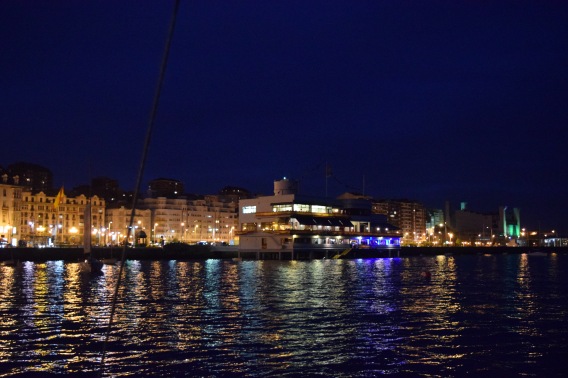 Jac with a square halo

On our way to the Santander Yacht Club