After a very rocky and disturbed night we weighed anchor at 0930 and slipped up the Ria planning to reach Muros, past Cabo Finisterre where we were hoping for better weather.  As usual it was not to be. The wind and swell again increased, but worse still, a sea fog came in which cut visibility down to less than half a mile with the view ahead even more obscured. With great bravery we ran away! As we ad only just passed the entrance to Ria in which Camariñas was located we turned around and made for there. As we cleared the open sea both the visibility improved and we arrived in the marina, built into the fishing harbour in bright sunshine. We were so glad that we had done so as Camariñas turned out to be a delightful spot. It is a very small but very well run marina operated by the local yacht club, the Club Nautica. The staff couldn’t be more helpful and the club restaurant was very good. We decided to look around the town and dined on octopus and patatas bravas at a waterfront restaurant. We were so taken with Camariñas that we wanted to stay another night and explore further. However, the following day looked good and with our recent experiences of poor weather, we decided to press on and try to round Cabo Finisterre where, we were assured, the weather would improve. 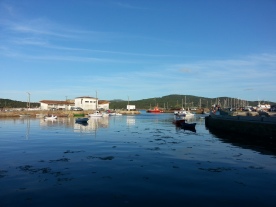