We left Camariñas  early as the weather was fine and we made good speed motor siling for the first hour or so. However, the wind dropped just north of Cape Finisterra so we motor sailed with the genoa for the remainder of the route to Muros. We had our fair share of Atlantic swell on the beam, but it was a long swell so not particularly uncomfortable. Finally we passed the cape, south of which the weather was going to improve (Honest!) As often seemed the case, the wind picked up as we reached Muros making the arrival on the pontoon tricky. Shortly after we arrived Pedro, who was mentioned in the pilot book, arrived and was just as helpful as the literature led us to believe. He recommended that we moved into the inner harbour as we had moored in the fishing boat area and he said we should have a rough time there with boats coming and going all night. We took his advice and he helped us to move to a better berth and close the facilities. Muros is a lovely town and the Marina office provided all we could wish for, including a small, secluded garden, great showers and free coffee making facilities. The only downside was that we arrived in the middle of a rock concert with the accompanying musical diarrhoea playing at maximum volume until two in the morning.

Morning broke to another windy day, but at least the music, if you could call it that, had stopped. We weren’t going anywhere in the conditions, but we were not too disappointed as we wanted to do more exploring. We wandered around the very pretty old town and stopped for lunch in a café. The town was busy with rock fans, although they must all have had cloth ears as the music was diabolical! During lunch we were entertained by a pipe band, (Celtic tradition is strong in Galicia) and followed the antics of an inebriated Zebra who was extremely entertaining! 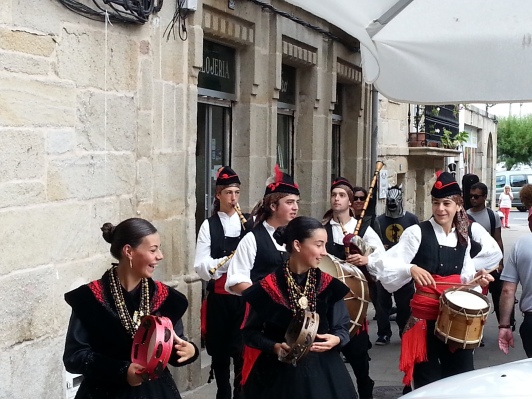 In the afternoon we clambered up the hill to take a look at the church and explored the town. Returning to Synergy in the evening, we discovered that the wind had taken its toll of Jac’s towel which we had left drying on the guardrail, but it had now disappeared. 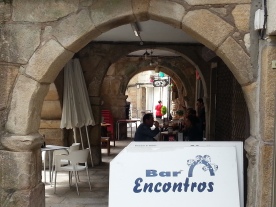