Up early and prepared the boat for departure with a quick trip to the harbour office to pay our dues. In a sizeable swell and cool, cloudy conditions we headed south once again aiming for Cascais, just inside the River Tagus, downstream from Lisbon. The initially light 5kt wind increased to 18kts as we progressed towards Cabo Raso but, finally the sun came out, the first really nice day we had seen for some time. A pod of 7 dolphins joined us and stayed with us for around an hour, playing around the boat and regularly leaping from the water, but their numbers started to dwindle as they moved on, enabling to do some important marine biological research. We turned the music system up to a deafening level and played the Drifters followed by the Kinks. At this point the dolphins returned on mass with a few friends in tow. Our conclusion: dolphins like The Kinks!

Passing Cabo Raso we altered course southeast towards the River Tagus estuary enabling us to use the Genoa and passing lots of commercial shipping at anchor on the way. We arrived at Cascais in warm sunshine but with a strong wind blowing off the reception pontoon enabling me to demonstrate how to get into a horrible mess when mooring. A helpful skipper from a boat ahead took a line from us but Synergy got blown sideways until we were at 90 degrees to the pontoon, in a mess and highly embarrassed. A bit of power brought us round and eventually we were all sorted and tied up, looking sheepishly around to make sure that we hadn’t had too much of an audience. The arrival formalities complete and expecting help to moor up in our berth, we made our way deeper into the marina to find our allocated spot. No one was there to meet us, but with the same fickle wind now blowing firmly onto the pontoon, Jac and I were able to arrive in good style and watch other poor souls in more difficult berths than ours struggling to get tied up.

Cascais Marina is a big, modern affair; well organised with all the facilities, restaurants shops and the like. We grabbed a hamburger at one of the Marina eating houses and settled onto Synergy for the night, expecting to move on again in the morning. 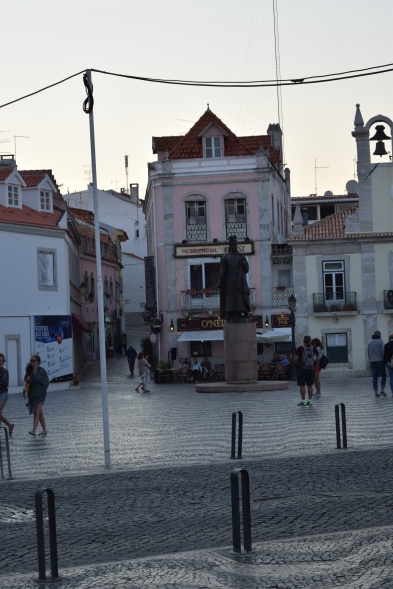 Morning dawned to a howling gale and we weren’t going anywhere today. This turned out to be an “English” day. We found a restaurant serving a full English fry up for breakfast and then we went to explore Cascais. It turned out to be a very pretty place, but very much a tourist town and not the sort of place that we like to spend too much time. However, we did find a curry house to round off the “English” cuisine. Then back to Synergy in a brisk and cold breeze. 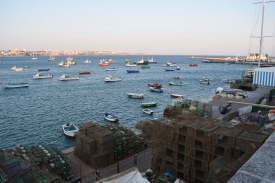