We slipped the mooring at Sines still in darkness at 0615 and set off on the 80 mile run to Portimão. We would have preferred a more leisurely trip with a stop on the way, but there is nowhere suitable to stop or even anchor between Sines and the Algarve. The run was again uneventful and it seemed that the weather had finally settled, as we had hardly seen a cloud since leaving Lisbon. There were plenty of fishing buoys around Cape St Vincent which kept us alert weaving around them. The Cape was a serious landmark on our trip as it marked the transition from the Portuguese Atlantic Coast to the Algarve. It was also the scene of a major sea battle during the Napoleonic Wars in 1797 when Admiral John Jervis, 1st Earl St Vincent, in his flagship HMS Victory, defeated a superior Spanish Fleet. He was accompanied by a chap called Horatio Nelson who was one of his ships captains. 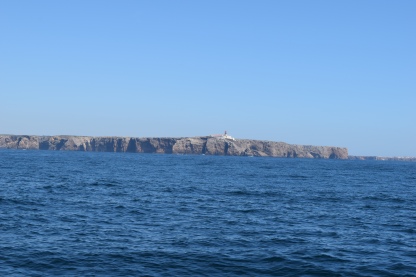 Rounding Cape St Vincent the wind increased as forecast accelerating our progress to Portimão which we reached at 1830, 12 1/2 hours after leaving Sines. The marina turned out to be a large modern affair just up the River Arade. It had an undeserved reputation for being a noisy place but, taking no chances, we asked to be berthed at the quiet end away from the night clubs.

View from the berth, Portimao

Having reached the Algarve and, finally, some settled weather, the pressure was off and we could afford to meander as we only had around 200 miles left to run to Gibraltar. We took the tender across the river to Ferragudo, a small town directly opposite the marina. We visited a small market and Jan bought some fresh fish for dinner. We wanted to explore the town, but a couple of shady looking characters were taking an unhealthy interest in our tender and outboard motor, so I stayed close to the boat while Jac and Jan went for  little explore. On their return, the girls reported that the town was worth another visit so rather than risk having the tender pinched, we motored back to the marina and took a water taxi back to Ferragudo. Near the water taxi station was moored a large sleek, silver motor cruiser that Jan decided she would buy when she won the lottery. Ferragudo is a very pretty town with lots of winding back streets. The exercise and heat required several stops for refreshment but eventually we made or way to the church, perched on a hill with lovely views over the river. 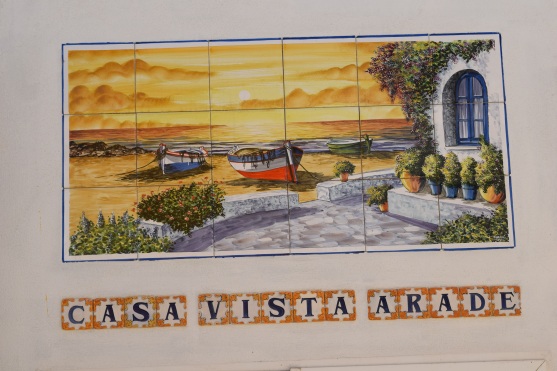 View from the Church, Ferrugado

View from the Church, Ferrugado

teep climb to the church

Strangely, there was a tiled mural of Robert Baden-Powell, founder of the Boy Scout Organisation, just outside the church. We didn’t discover why he should be so honoured in a small Portuguese town. After a good explore, we made our way back to Synergy via the last water taxi of the day.

Today was Jac’s 26th birthday! She decided she would like to visit Carvoeiro, a small touristy seaside town just along the coast where her aunt had lived. We took a taxi to the town and decided to visit Smiler’s Bar in the centre, run by Geraldine, an old friend of Jacquie’s aunt who was very welcoming. After a light lunch we took the bus back to Portimão, which was quite a walk from the marina in the heat, so we were obliged to stop for more refreshment on the way. In the evening Jac, Jan and I went to a marina side restaurant for  celebratory meal. Jan organised some deserts with candles on for Jac and the waiter, diplomatically and unbidden transposed the six and the two!    After dinner we wandered into a beach club to finish with margaritas. Jac managed to pour some of the contents down her new blue dress, purchased only that morning in Carvoeiro. And so to bed!