We would have loved to spend a little more time in Barbate, but the forecast for the Straits of Gibraltar had been changed from “awful” to “quite reasonable.”  We decided to press on to Barbate which would then make the run Gibraltar relatively easy when the weather was suitable. The pattern of weather to which we had become accustomed exerted itself with warm, sunny calm conditions which changed slightly choppier as the sea breeze kicked in. 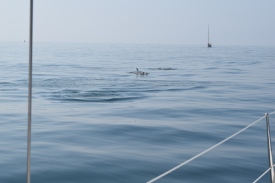 It was a very pleasant passage with some dolphins playing around the boat on the way and passing the magnificent old city of Cadiz, the oldest settlement in Europe. Further down the coast we passed Cape Trafalgar where in 1805 Admiral Lord Horatio Nelson had destroyed the combined French and Spanish Fleets at the cost of his own life.

Arriving at Barbate we made our way through the fishing harbour to the yacht marina and, as usual, a stiff breeze had blown up. Ahead of us a couple on a catamaran were struggling to tie up on the reception pontoon, but as soon as they got close enough and slowed to a stop the wind took over and blew them off again. Eventually they gave up and tried another berth which they still managed to get blown into sideways. It was reassuring to see that it was not just Jacquie and I that had the odd problem.

Barbate is not a particularly pretty place so we decided to move on as soon as possible.