The day dawned bright and sunny again with a forecast which was set fair for the run through the straits to Gibraltar, so off we set on the last leg of our journey. After a calm start to the day the wind increased to a stiff easterly so we tried beating into wind for a while until we realised that it would take 20 hours or so to reach Gibraltar using that technique. So……..back to the engine again. (sigh).

The scenery on the way was spectacular with Europe on the port side and Africa on the starboard. We had timed our departure to catch the tidal stream that flows quite strongly into the Mediterranean so we had 2kts of help from the flow to help us along at times. Other boats were using the same plan and following the same inshore route enabling us to do a bit of “racing” albeit under sail and engine. 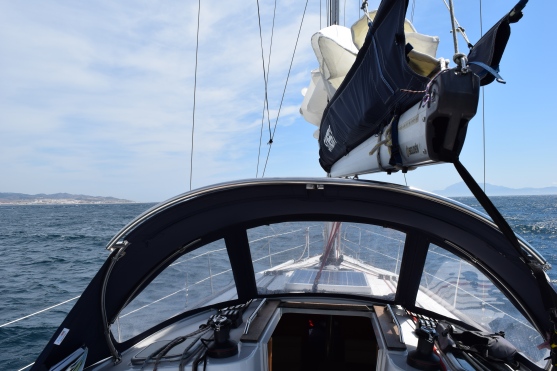 Eorope on the left, Africa on the right 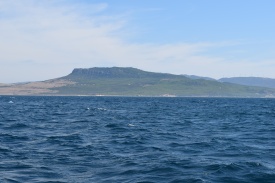 Africa. The other pillar of Hercules 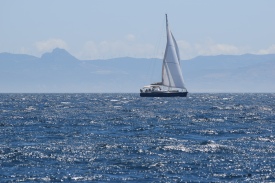 We passed the site of Baelo Claudia, a ruined Roman town, that I had visited some years before. It had been a centre of production of garum, a fermented fish sauce valued by the Romans, but the town had been destroyed by an earthquake in antiquity.

Further along we passed Tarifa marking the narrowest point of the straits and also one of the windiest places in Europe. Tarifa is a haven for kite surfers and we could see the forest of kites as we passed the town. The narrow stretch of water with wind against tide made the passage quite choppy for a while, but we soon caught our first glimpse of the Rock as we turned north-westwards towards Algeciras Bay. Entering the bay the whole of the Rock came into view and we dodged our way around anchored and moving commercial shipping to find the entrance to Queensway Quay Marina.

The first time that I had visited Gibraltar in 1979 Queensway Quay had been a part of the extensive Royal Navy dockyard, but with the withdrawal of the naval presence on the Rock the area has been redeveloped into smart flats surrounding the marina. Finding the in wasn’t that easy as it is very narrow with a ninety degree turn just after the entrance. 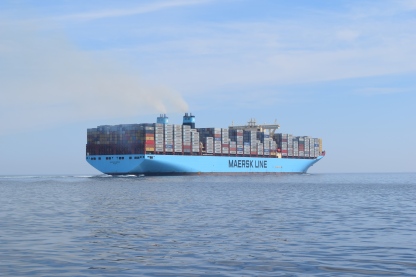 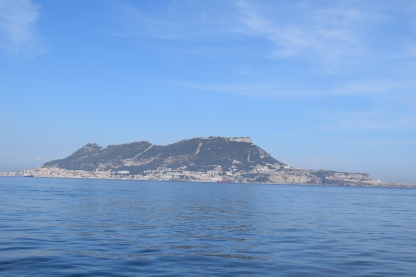 Calling on the radio we were directed to our berth, a fore and aft mooring using lazy lines. We moored bow first – a big error! Jac couldn’t get off the boat at all and the only way that I could escape was by climbing over the anchor and stepping onto the top of utility box before dropping down onto the pontoon. I went to the office and paid our dues and joined Jac back on Synergy. We quickly reversed the boat out, spun her around and reversed back into the berth and tied up.

We had arrived and Synergy would not move again for several months. We were very proud of ourselves; we considered ourselves to be pretty inexperienced sailors but we had travelled for 3 months over 2000 miles with 51 stops, all possibilities for hitting something without any major mishaps. Most importantly of all, Synergy had become home and we had total trust in her to bring us through whatever we were likely to encounter.

Time for a drink!