Anyone who is bored enough to read my ramblings may perhaps be wondering what has happened with the Jac and Chris odyssey, as we haven’t added anything to our blog for a while. There is a simple reason for this in that we actually haven’t been anywhere since the last post, recounting our short trip to Algeciras and back. Well, not strictly true,but the boat hasn’t moved.

There are lots of reasons for this……..all of them mind crushingly feeble.

The first delay occurred as I was offered some flight tests at Flight Training Europe in Jerez de la Frontera which I gratefully accepted. These took a little longer to complete than anticipated and really didn’t slow down our progress at all as we had a series of boat jobs to complete before we would be ready to leave. 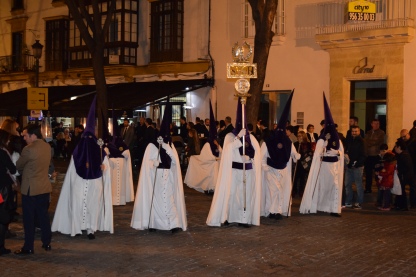 It also gave Jacquie the opportunity to experience Semana Santa in Jerez, which is a spectacular event by any standards. In the week running up to Easter, a parade of floats make their way from church to church in the town accompanied by brass bands and people dressed in uniforms that look reminiscent of members of the Ku Klux Klan. All this is a sort of penance with the extremely heavy floats being carried by large numbers of people, some even in bare feet. The load is such that they have to stop every couple of hundred yards or so for a breather in spite of having been in training for some weeks ahead. All the spectators are out in their Sunday best and the streets are packed with everyone having a jolly good time. 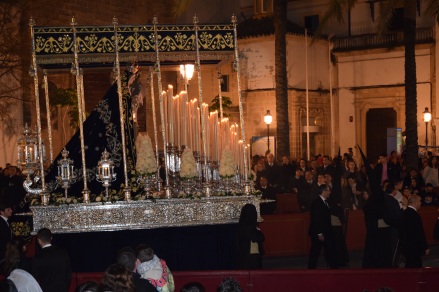 Having completed the flying, we still had a list of jobs to do before we could set off. The outboard motor for the tender needed servicing and the third reef needed rigging on the mainsail. We had bought new sails before we left the UK, but the new mainsail was fitted for 3 reefs but the old one had only 2. This required a couple of pieces of hardware and a lot of rope and just a morning’s work, but it was essential to get the job done before we reached the fickle winds in the Mediterranean.

Jacquie wanted to do some writing and had received a positive response from one of the yachting magazines so that required a little time to complete. At the same time we thought we might complete a longer item on Gib, particularly the places that the average day tripper never visits and that required a couple of days research. Being dedicated, budding freelance writers this required lots of exploration of the back streets, particularly the off-piste watering holes which sometimes left us researched as newts!

Nevertheless, we should still have left Gibraltar for the Costa de Sol 2 weeks ago and now we come to the pinnacle of procrastination.

Mooring in the Mediterranean usually involves tying up either bow or stern to. (Stern to is preferable as climbing over the bow can result in a nasty encounter with the anchor and possible damage to one’s sensitive regions) Stern to mooring often leaves an unhealthy gap between the boat and terra firma, a problem usually solved by a purpose built passerelle (the expensive version) or a plank of wood (the economy solution). As the purpose-built versions cost anything between £300 and £500, we decided that a length of scaffold board would suffice. As luck would have it some friends we had made in the marina, Michael and Wendy, found a piece of 1¼ inch plank floating in the marina so problem solved! Not quite so. Laying a piece of wood on the back of the boat tends to cause the deck to be rapidly ground away so we needed a way of attaching it to the boat, but elevated above the deck. I designed a stainless steel bracket to fit to the swim ladder bracket with jubilee clips so that the plank could be dropped onto it. Unfortunately, the stainless steel bloke was hopelessly unreliable, but after 2 weeks, (should have been 5 days) the piece arrived and the job was completed. I leave you to judge its success from the pictures. A friend nicknamed it a “Plankerelle” so that is what it forever shall be called. After 2 days use neither of us has fallen off it………..yet! 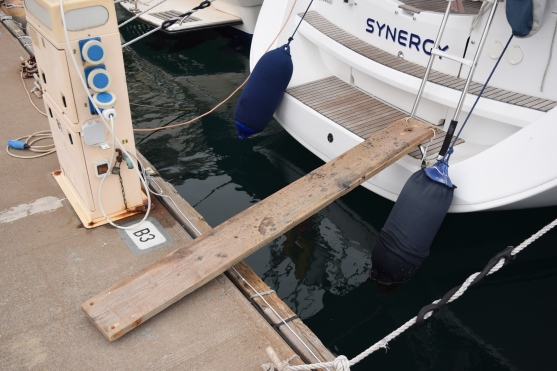 The next masterful piece of procrastination came from a chance question in Sheppard’s, the chandlers in Gibraltar, when I asked if they could source a Jeanneau chopping board which is cleverly attached to the underside of the sink cover. The old part was badly scored and ingrained with dirt when I bought the boat and none of our efforts…..dishwashing it, bleaching, soaking it in concentrated sulphuric acid  it or even hitting it with heavy objects would get it clean. (OK we didn’t try the last two methods, but you get the picture) It looked horribly unhygienic, so we never used it. The nice man in Sheppard’s said that they could get one, price 33 Euros, but he couldn’t tell us what the shipping cost would be. Thinks I, “Can’t be more than a tenner,” so lets go ahead. Around 40 quid might seem expensive for a chopping board, but we had searched all over for something suitable, or that could be adapted to fit and nothing seemed to be available. The nice Sheppard’s man said it would be here in 5 days so all looked good………until it arrived. I received an apologetic call from Sheppard’s saying that the board had arrived and the shipping came to over £30. “THIRTY POUNDS TO SHIP A PIECE OF PLASTIC FROM FRANCE!”

Note to self: “Never buy another bloody thing from Jeanneau”

However our “gold plated” chopping board is now in place but we are afraid to use it!

Note to self: “Never buy any gas-related product in Gibraltar.”

Despite all this apparent procrastination, the truth is that we have fallen in love with Gibraltar. It is small, quirky and very convenient; we can walk everywhere as nothing is more than a mile or two away and, as everyone speaks English, one can be sure of making oneself understood. It isn’t necessarily cheap (see above) but the people are friendly, the weather is generally warm and sunny (dull and overcast today) and we have made numerous friends, many of whom have sailed extensively, but have made their boats in Queensway Quay Marina their homes. They too have come to appreciate the lure of Gib and not just because it is a tax haven! Many will never move again and others are planning to travel onwards, if only just for the summer before returning to Gibraltar. Our challenge is to move on before we both need liver transplants!

As an aside we have also bought a new mint plant, Robert 2. (Robert Plant…….geddit?) Robert 1 died, quite an achievement as mint seems impossible to kill, but now Jacquie has a supply of mint leaves for the Pimms.

Now please excuse me as I am just going for a beer while we wait for my new bank card to arrive……..sometime next week.