On 29th June we finally found a break in the persistent north-easterly winds which had kept us penned up in Cartagena . The forecast was for a maximum of 13 knots and in a direction that would enable us to sail for part of the time.

We left Cartagena  at 0935 to sail the 45 (ish) miles to Torrevieja expecting favourable winds for the next few days which would enable us to reach Menorca by 6th July. Leaving the harbour we immediately encountered winds of 25kts in the gusts and with 2 reefs in the mainsail, a semi furled headsail and Jac helming, we were scudding along at seven and a half knots and occasionally topping 8, supersonic for Synergy. After a couple of hours we had to turn north-easterly to round Cape Palos and that took us directly into wind so the engine once more did the work.

We arrived at Torrevieja at 1730 and were berthed alongside friends that we had met in Gibraltar,Ted and Chris, on their motor catamaran “Legless” in the International Marina, one of 3 inside the huge harbour at Torrevieja. A quick shower and off to the Nautic, a marina side restaurant, for a meal with Chris and Ted before falling into bed.

Synergy in her berth at Torrevieja 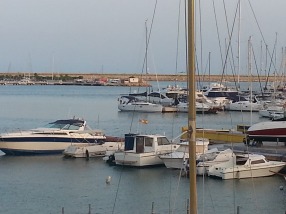 Breakfast at the Nautic with Chris and Ted and then we waved goodbye and tootled across to Marina Salinas to the refuelling berth to top up the diesel for the run to Calpe. As we left I noticed that the engine RPM gauge wasn’t working. No problem, just set the power by ear or for a target speed and we can fix it later.

What I had not appreciated was that the RPM gauge takes its feed from the alternator which had failed. In the bright sunlight the illuminated battery charging light was invisible and, over the noise of the engine, the “No Charge” warning was almost inaudible. Besides which we were busy getting the sails up and dodging some lunatic in a small fishing boat who, inexplicably, cut across our bows and then stopped 100 yards ahead.  Jac dodged round the deaf dumb and blind kid, who seemed completely unaware of the carnage that he had nearly generated and we settled down for the trip to Calpe with a wind that was going to give us a bit of a push.

About 4 miles out I thought I could hear a beeping noise from below and investigation showed that the electrical panel was not happy. The battery was not charging, so the only thing to do was return to Torrevieja. Half an hour later and we were back in our berth with the companion way steps off and my head inside the engine. It rapidly became clear that the alternator was a terminal case with a lot of melted wiring evident behind it.

We weren’t going anywhere until we had fixed the problem and we needed professional help. A quick call to Ted who had friends in Torrevieja, but was now on his way back to Gibraltar and he put us in touch with Danny who ran an upholstery business, Skyline Upholstery. As I called him his friend Steve Wayman, of Waymarine and an electrician, (yahoo!) walked into the office. Steve was with us in an hour and a half and quickly confirmed that we would need a new alternator and some surgery on the damaged wiring.

Apart from the technical difficulties, the weather was due to turn on Sunday 3rd July to a howling north-easterly and not abate until Tuesday 2nd July. We had missed our weather window and schedule-wise, we were in deep trouble.

The alternator arrived on Saturday 2nd of July and Steve came straight over to fit it. With the alternator on and the damaged wiring replaced, there were still some anomalies in the system and Steve resolved to come back on the Sunday and sort them out. The following day Steve arrived at 10 am and expected to be done in an hour or two. At 6 pm after a lot of head scratching the job was finally done. There had been a deep snag in the wiring which took Steve hours to pin down and fix. Several beers later and with our grateful thanks Steve left for home. Where else would you get that sort of service? Steve worked the whole weekend to get us going  and his charges were very reasonable. A great guy who I can thoroughly recommend.

With the wind blowing hard as forecast, Jac and I spent Monday completing boat and domestic jobs and testing the engine again in preparation for the run to Calpe…….late again!