At 1015 in the morning we left Calpe, rounded the eastern side of the impressive lump of rock and turned onto a course of approximately 060° which we would maintain for the next 20 hours or so. The weather was once again relatively calm with clear skies and light winds. We made a note of our position every hour expecting to be out of sight of land for some of the time but the brown hills of mainland Spain were still in clear view when we sighted Ibiza and we were always in view of one of the islands from then on. 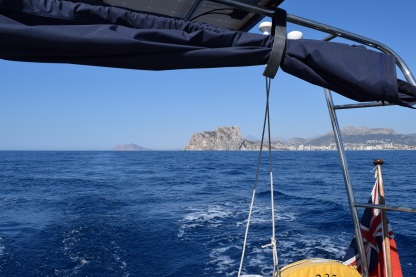 Calpe behind us heading for Menorca 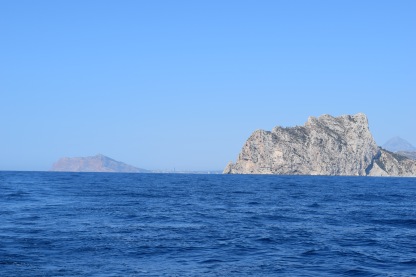 Calpe behind us heading for Menorca

We settled into our 4 hour watch system and most of the other traffic disappeared with the exception of a few cargo ships and ferries and after dark we were almost completely alone. The wind was light and quite fickle but Jac was able to unfurl the headsail as we passed between Ibiza and Menorca and we were able to maintain over 7 knots for most of the passage.

Apart from large stretches of water there was little to see, but after a quiet night, during which the wind dropped and the sea turned to a mill pond, Jac saw some dolphins lazily making their way in the opposite direction and I saw a swordfish jump from the water. The north coast of Majorca is very impressive, rocky and mountainous and we passed only 4 miles north of the shore. 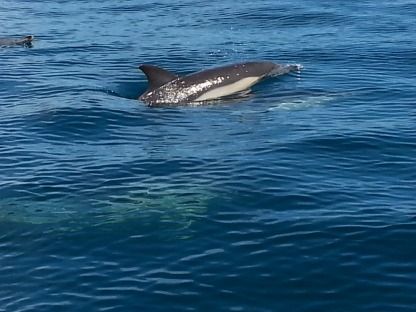 The final leg from the north-east tip on Majorca to Menorca seemed to pass quickly even though it was about 5 hours sailing. Menorca is much more low-lying than Majorca and our destination, Ciutadella, was towards the western most part of the Island. As usual, the light wind picked up to force 4 just before we arrived, just before we had to furl the sails. The entrance to the port was quite hard to see, but once we had it identified it, we found ourselves gently motoring up a beautiful little “Cala” to the centre of the town.

Marinas in the Balearics are phenomenally expensive. We had phoned ahead and booked a berth with the Club Nautico who were demanding 97 Euros a night, but a quick call on the radio to the public mooring office secured us a berth in a better position at less than half the price. Still expensive compared with most places we had been, but it would bankrupt us at half the rate!

Ciutadella is a beautiful town, steeped in history, with lots of narrow winding streets and Jac and I went exploring while Sarah and Claire arrived by bus from their holiday flat a couple of miles away. We met them after they arrived at the bus station and found a restaurant overlooking the Cala and the moored boats for an evening meal before Sarah and Claire returned for a last night in their flat before joining us on Synergy.

We fell into bed feeling very proud of ourselves for having achieved our longest overnight run on our own to date, a distance of 199 miles.

Jac and I spent the morning exploring the town while waiting for the girls to arrive. We found a supermarket and collected some more fresh food and tried to resolve our ongoing problem of poor internet connection, only to discover that my Samsung tablet was not equipped to take a chip which would have given us a connection. Back to the drawing board, or in this case, the usual lousy internet provided by marinas.

The girls arrived in the evening and, after a meal, we were all set to leave the following day.