If you have never read Patrick O’Brian’s books about the Royal Navy during the period of the Napoleonic Wars then I can thoroughly recommend them. They centre on the exploits of Jack Aubrey, a naval officer and his great friend, naval surgeon and spy, Stephen Maturin, and they have been acclaimed as masterpieces of historical fiction although, like most great historical novels, they contain quite a lot of historical fact as well. The title of the first of the series of twenty books was used for a Hollywood film, Master and Commander, starring Russel Crowe and Paul Bettany, but despite being a reasonable film it didn’t come close to doing the books justice. 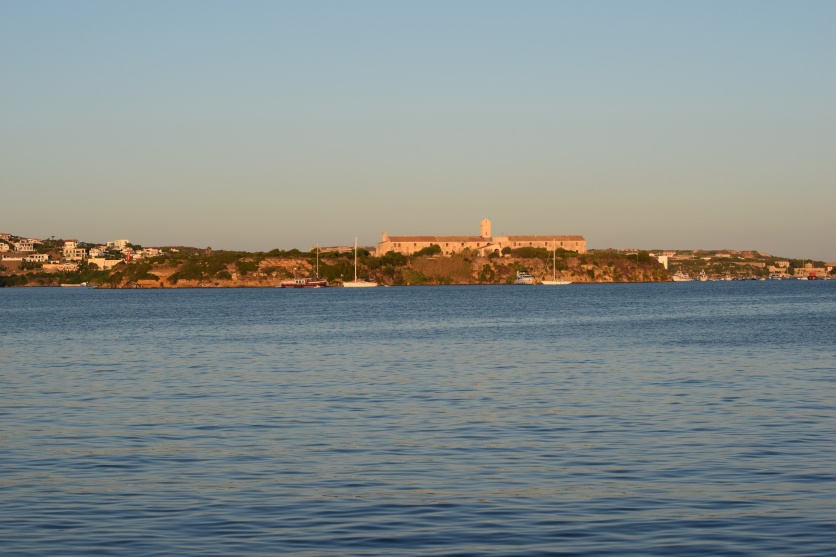 The reason that I am blathering on about this is that the book, “Master and Commander,” was set in Mahon in 1802 at the time when it was a Royal Navy base and being a great fan of the books, I was really looking forward to seeing the town.

Mahon harbour is hugely impressive being some 3 miles long from the cliffs of Cape Mola to the western end of the reach. It is easy to see why the Royal Navy valued it so much as a safe haven dominating the Eastern End of the Mediterranean and within easy reach of both France and Spain both of whom we were then at war with. Much of the history of the time remains, with the old naval hospital on the Illa del Rei, the dockyard (still a Spanish Navy base) and many of the old defences still standing. The harbour is wide enough and deep enough for cruise ships and ferries to mainland Spain to negotiate, which can be quite intimidating to those on small boats.

Back street in Mahon

Back street in Mahon

Over the next few days we explored Mahon, which is a delightful place and, at the top of the steps to the Old Town, boasts the best ice cream shop in the world! We also discovered a great cafe called the Can Xavi which had an extensive menu at reasonable prices. We went there several times for lunch.

Sarah and Clare left us to return to the UK  12 July and we then waited for my son, Stephen to arrive on 16th. The weather turned awful as the Tramontana, a wind which howls across the Gulf of Lyons from France blew up. It was blowing up to 50 kts outside the harbour so we were glad that we were safely tied up in a marina. Even so, on 13th July we couldn’t risk leaving the boat as she was moving around so much that there was a danger that she would smash into the pontoon.

On 14th July a Spanish flagged boat called Ermita del Conde arrived alongside us. The lady skipper turned out to be the owner of a vineyard in the north of Spain near Burgos and she gave us a bottle of her red wine to sample. It was delicious. Thank you Marta.

On 16th July Steve arrived from the UK so we could now move from Mahon which was proving to be very expensive.

It has been a long time since I last wrote a blog post. Last July to be exact, but procrastination has once again taken over on a grand scale. We were having such a great time in Menorca that all thoughts of documenting our experiences was forgotten. However, I have now the time, and more importantly, the inclination to write again.

Temporary disaster! I can’t find the boat’s logbook which we might have left on Synergy and we are now back in the UK. W e use the logbook to remind ourselves what happened and without it all would be guesswork.

All is not lost however as I thought I would try to include a video recording, something that I have never attempted before. This has nothing to do with sailing as I don’t have any sailing videos, so this can be regarded as an experiment.

Before we bought “Synergy”, I owned an aircraft which I had bought in the USA, had it broken down and shipped across the Atlantic to Liverpool, transported to Wickenby in Lincolnshire where it was reassembled before I flew it down to Jerez de la Frontera in Spain, where I was then working. I kept the little red machine in Jerez until I left there in 2010 when I flew her back to the UK. I sold the aircraft in 2012 as I had hardly flown her for a year. A combination of work and the lousy English weather kept her in the hangar.

This is a video of my Pitts Special S2b, N5329X, which now resides in Belgium. The video was mostly filmed and produced by a Flight Training Europe student, Tom Stebbing, who is now a Boeing 737 captain with Ryanair.