With Steve safely with us from the UK we left Mahon and headed eastwards down the harbour towards the open sea. The Tramontana was still in evidence and we decided that , after a few days of blowing hard we should probably have an easier ride if we stayed on the south coast so we headed south and then west back towards Ciutadella. There were plenty of picturesque Calles to explore and we decided to take a look.

According to our pilot book, Cala Covas, a few miles west of the south eastern tip of Menorca is one of the most beautiful inlets in the Balearic Islands, so we decided to go there for the night. We then had our first encounter with the overcrowding that is evident throughout the islands in the summer. There was no space in the cala for us to anchor so with plenty of daylight left we moved on and found an anchorage at the eastern end of a long beach called Platges de Son Bou which, in the calm conditions, suited us perfectly for the night. Steve went swimming and rock climbing up the low cliff, while Jac and I remained on the boat.

Later in the evening we witnessed a bit of nature’s brutality in action when a herd of wild goats made their way along the cliffs. One individual seemed to have upset the others and was being picked on by being butted mercilessly by the others. Eventually, although we could not see the outcome, it appeared that the poor goat had been severely injured by the others. A group of goats was standing around a hollow in the rocks looking (sheepishly?) at something on the ground. Eventually they all wandered off leaving the mortally injured party behind.

The following day we again encountered the problems of lack of space in the Balearics in the busy season. We moved along the coast to Cala Trebelujer where we had previously anchored with Sarah and Claire on board. Arriving around 10 in the morning there was plenty of space and we found  a prime anchoring spot, or so we thought. It transpired that we had stopped almost on top of a buoy used by a day trip boat and we were in the way. We moved further along the coast to Cala Galdana where we stopped for lunch but the conditions were too rough for it to be a tenable overnight anchorage so we went back to Cala Trebelujer in case there was some space. No luck! So we ploughed on to Ciutadella to see if there were any berths available. No luck again. However, we were fortunate  to find an anchorage just south of Ciutadella that was not marked in any of our documents  where we were able to spend a quiet night.

The Balearics were proving challenging just to find somewhere to spend the night!

A quick call on the radio to the Port Authority in Ciutadella, to our great relief, secured us a berth in the port for 2 nights. Phew!

We spent a couple of days exploring the town more thoroughly than on our previous visit and made good use of the “Pearl Hamburg” restaurant.

We left Ciutadella on our way back towards Mahon at 1030 and found Cala Trebelujer almost deserted so we anchored in a prime spot away from any buoys.

We went swimming, scrubbed some of the gunge off the hull,  and Steve and I went exploring up a small river at the top of the bay. This required dragging the tender out of the water over a sand bar and into a river on the other side from where it was then possible to make our way about a mile up the river before it became too small to navigate. The river was an oasis of peace and quiet, populated by terrapins, we were assured although we didn’t see any. 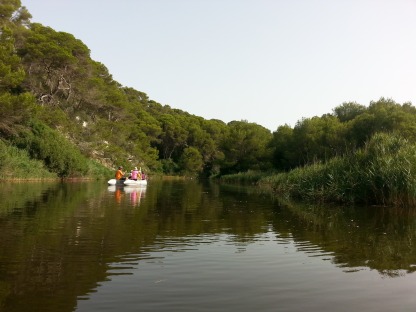 Jac and I repeated the exercise the next morning when, if anything, it was even more peaceful.

After Jac and I made our way back from the river, we raised the anchor and motored back to Mahon, there being no wind at all. We had booked onto a floating berth in the harbour, but as we had to get Steve and his bags to the airport we took up the option of a berth in Marina Menorca at the western extremity of the harbour. This was a bit out of the way, but the marina provided electric bikes for usage with only a deposit against damage and they proved an excellent and easy means of transport.

This was Steve’s last day with us so we walked up the hill to the old town and went exploring. We spent a fascinating hour in a museum in the town before returning to the Can Xavi for lunch, where we had previously been with Sarah and Claire. It didn’t disappoint.

In the evening we walked all along the waterfront almost to the Marina Mahon to Pierro’s Restaurant where we had a final evening meal before Steve’s departure in the morning.

We breakfasted on the boat and then ordered a taxi to run Steve to the airport. The marina provided baguettes which were delivered to the boat each morning free of charge. However, at the prices the marina was charging for an overnight berth they should have been providing a 4 course meal!

We accompanied Steve to the airport and said goodbye and then we had intended to move Synergy to a less expensive mooring, either on an anchorage or on a floating pontoon in the harbour. However, the Tramontana had started to blow again so we stayed put in Marina Menorca, well sheltered as far up into the harbour as we could go. After a lazy day on the boat, Jac and I went to a nearby cafe called the Paput Burger and Cocktail Bar which did good food and great music. Jac and I were on our own again.

One thought on “Around Menorca (Part 1)”