Having run out of water it was now essential that we filled our tanks. The gale that had been blowing all night had subsided, but as we left our anchorage, the after affects were still to be seen. We had only to travel around a point of land into the next bay to the south, a distance of around 15 miles, but the gale had whipped the sea into the consistency of a washing machine. The ride we experienced became more and more wild so we hooked onto the boat as a safety precaution, something we had rarely felt the need to do in daylight hours before. Turning the boat across the sea to enter the next bay proved to be somewhat difficult and we moved well off shore to slight less confused water before we attempted to do so.

However, we completed the manoeuvre and the motion became easier as we entered Alcudia Bay. This was the roughest ride that we had experienced to date. Off the coast of Portugal the swells had been large, but with a long interval between crests they gave a smooth ride. The short confused swells of that two hour trip were far from comfortable.

Arriving at Alcudia we filled up with fuel and water and I made my way to the marina office to see what they had available. No space at all came the reply. “But, but, you said get here before 1200 and there would be a berth available,” was my reply. “Sorry.”

Back I went to the boat. Neither myself nor Jacquie could face another night on the anchor if we could possibly avoid it. We were on the east coast of Majorca with an easterly wind and just about everywhere was exposed to the weather. Jac decided to have another try, so she went back to the office to do some serious grovelling of which she is a master. They did have a berth and, yes, we could stay for 3 nights. Great. Peaceful nights and hot showers! We know who is going to do all the negotiation for berths in the future.

After the excitement and short nights of the past few days we spent a quiet day on the boat and then walked into town in the evening. Quite a nice place, but very much an English holiday destination. It didn’t seem particularly wild though……….more of a family holiday spot and certainly nothing like the carnage of Magaluf which I had the misfortune to visit a few years back. But that is another story. We found an Irish bar and then another one. It’s strange how there are so many Irish bars around the world and few are anything like the ones to be found in Dublin. However, the beer and wine hit the spot.

As we went back to the boat we watched a very impressive group of drummers doing their thing on the beach and we found that the path back to the marina was packed with stalls selling various goods. We bought a collapsible wooden fruit bowl to replace the old one we had that had fallen to pieces.

On the recommendation of some neighbours on the pontoon we went for breakfast to a cafe called, The Boathouse, run by a Brit from Bishop Stortford. It really is amazing what the British will do to get away from the weather. After a full fry up, just the thing in the heat of August, we made our way to Alcudia town. It turned out that we were in Alcudia Port, whereas Alcudia itself was a couple of miles away up the hill. We stopped for a respite from the heat at the Mosquito Bar, unsurprisingly empty with a name like that  and then walked up the hill to the town. 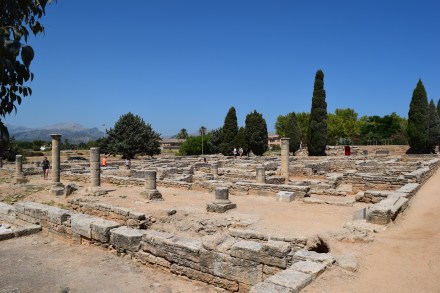 Alcudia is an old Roman settlement and the ruins of that civilisation are extensive, if not much explored. Jac and I spent an hour wandering around the ruins and then made our way into the old, walled medieval town which was equally interesting.

We wandered around the old town which was very picturesque and decked out in ribbon for a festival. We then visited the museum before heading back to Alcudia Marina, this time by bus.  An evening spent hunting for my hat, which I had inexplicably left in one of the Irish bars and then to a steakhouse for a meal. And so to bed.