We decided to move back to Palma and spend more time exploring the city. A quick call to the marina determined that they could accommodate us so we motored the 3 miles to Palma harbour. There must have been some communication breakdown as the radio call to the marina was met with rejection. “Come back again in 3 hours,” was the response. With not too many options available to us we motored out of the harbour and along the breakwater and dropped anchor in the bay. We had some lunch, read and killed time until our 3 hours was up. Back into the charter marina we were faced with a last minute panic as the marinero called us to ask us to get our tender out of the water. As we used it a lot we normally dragged it behind us for short routes and then transferred it to the bow as we approached our berth so that it would not impede the stern to mooring. I managed to drag it onto the fore deck, not an easy task as it is very heavy. We tied up safely and the went back to the La Naya for a repeat meal of our first night in Palma.

I now come to the most tragic event of the whole trip. Gentlemen, get your handkerchiefs ready. In the evening I had run out of cigarettes, so I went hunting for some in a bar called the Escape Bar and Bistro in the Placa de la Drassana, just across the road from the marina. The machine was out of action, but the English chap I spoke to directed me across the square. The Escape Bar had looked good so I took the girls back there after our meal. You will never believe what comes next. The beer was free! Yes free! In fact, all the drinks were free. So far, absolutely unbelievable. It transpired that the chap to whom I had spoken earlier during my cigarette hunt was the owner. He had sold the business and this was the last night before he closed the doors for the last time to concentrate on other ventures. The tills had gone so he was giving the stock away and and a magnificent party was in progress. “Fill your boots,”  he said. “You can chuck some money in a bucket if you like.” So, we had a drink and chucked some change into the bucket.

Now this is the tragic part. Jac and Jan were very tired so we walked away from the pub where the beer was free! That is probably the only time in several lifetimes that one might have that opportunity. There is probably a greater chance of being abducted by aliens and we walked away after only one drink. It took me days to recover and has left me scarred for life.

Still recovering from the shock of the previous night’s events, we decided to go sightseeing. We walked up to the old town near the cathedral, half looking for a shop where I had bought an excellent hammock many years before. In St Eualia Square we found a great cafe selling Paella, Jac’s favorite and then we decided to take a hop-on-hop-off bus around the city. We had found from previous experiences in Porto and Lisbon that this was a great way to see the sights and we were not disappointed. We stopped at the Castell de Bellver, a castle with tremendous views over the city, spending an hour or two looking around.

The castle was constructed in the 14th century and has also served as a prison. Today it houses a history museum and the central courtyard is used for concerts. 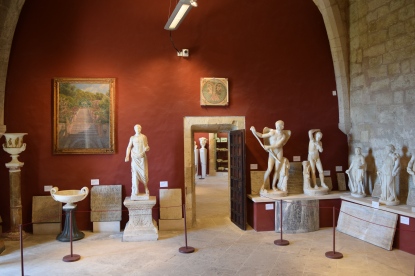 Museum in the Castle

From the road outside the castle the views over the city were stunning, so we stopped to take some photographs before taking the hop-on-hop-off bus back to the marina.

This was Jan’s last day with us so Jac and Jan went on a tour of the cathedral and we all went to the Born 8 for another spectacular Wiener Schnitzel.

We all walked through the old town to the bus stop where we would say goodbye to Jan. We were a little early so we stopped at a cafe for breakfast before seeing Jan off. It was going to be some time before we met up again as Jan was leaving for Qatar at the end of the week.

Having said goodbye, Jac and I went shopping. On 28th August it was Jac’s birthday. She had expressed a wish to learn how to play a musical instrument and I had spotted a music shop in La Rambla during our bus trip. We had left the boat early to see Jan off and we had some time to wait before the shop opened so we grabbed a coffee in the Lupe cafe across the street. When the music shop owner arrived we were his first customers and Jac opted for a handsome ukulele together with a hard case and we made our way back to the boat.

We spent a lazy day on the boat with Jac practicing on the ukulele, much to the dismay of our neighbours. Perhaps that is why a departing catamaran clipped our bow as he was leaving the marina. Just getting his own back, I suppose. 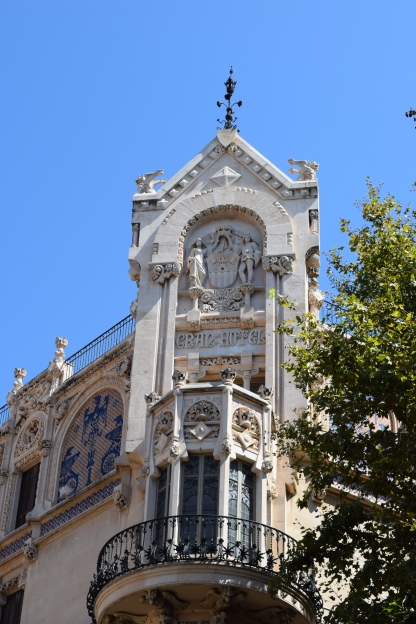 We had decided that it was time to move on. One last wander around the beautiful old town around the cathedral and we made a detour to go to a shop called Fine Books, which Jan had discovered before she left. This is the most fascinating second hand book shop that I have ever seen with piles of books and papers everywhere in, it would appear, in no particular order. However, the rather eccentric English gentleman who owns and runs the shop seems to know where everything is and can direct you to the item that you are looking for. If you go to Palma, this place is a must to visit, absolutely superb. (Fine Books, Carrer d’En Morei, 7, 07001 Palma, Illes Balears, Spain.)